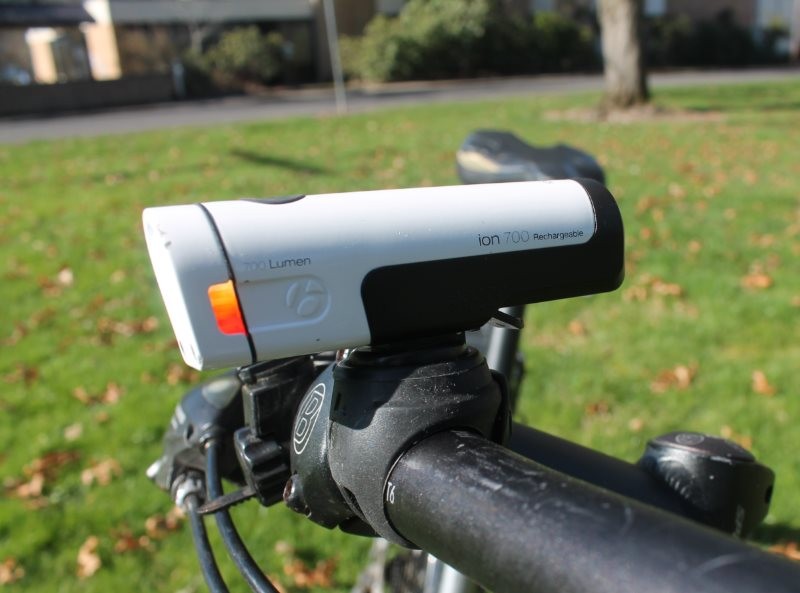 Review: Compact, bright, and easy to use

Most cyclists will recognize Bontrager, or at least its parent company Trek – one of the largest bicycle companies in the world. Bontrager has been selling some very basic lights for years, but the company is hardly well-known as a lighting company. That's why I was so pleasantly surprised when I started using the Ion 700 they offered to send me. It gets almost everything just right, and is one of the most impressive first attempts at a high-power single-piece rechargeable light I've ever seen. The first thing I noticed is that the Ion 700 is compact. It's narrower than many comparable lights, with a sleek and clean design. The low-profile mount keeps the light just barely above the handlebars. It's operated by a single button on the top, and has a USB micro port on the bottom for charging.

Upon using it at night for the first time, I found the beam pattern to be exceptionally smooth and well-shaped. The emitter and bezel have a slight downwards angle, resulting in a vertically asymetrical beam. Many lights waste a lot of their output by shining 50% of the beam up into the trees, but the Ion 700 keeps more light in front of you with its particular beam shape. I would like to see an even sharper vertical beam cutoff to prevent blinding oncoming traffic, but the beam pattern is still superior to the generic circular beam as-is. The Ion 700 also has amber side visibility ports, reminiscent of the L&M Urban series. These cutouts significantly increase the angles from which the light is visible, although they do not emit quite enough light to illuminate shifters or bike computers on the handlebars, whereas the side lights on the Urban series do. Compared to the many lights with no side visibility at all, this is a thoughtful feature that I'm very thankful for.

Three brightness levels and two flash patterns can be cycled through by pressing the power button on top of the light. The light has a mode memory, so it returns to the previous brightness or flash pattern after being turned off and back on. The highest output setting provides more than enough throw to comfortably ride on unlit and uneven paths, and is wide enough to fully illuminate a wide neighborhood street. Riding on well-lit city streets I find the low setting to be adequate in most conditions.

The first flash pattern has a steady beam that's even dimmer than the lowest non-flashing setting, and pulses brighter about once per second. This pattern is eye-grabbing without being disorienting, and is a good compromise for the benefits of a steady light (which is easier to judge distance by) and a flashing light (which is more attention-getting). The second flash pattern is a random flash which alternates between low-power and high-power flashes. The second pattern is bright enough to be daylight visible.

Bontrager includes their "Ion sync" bracket mount with the Ion 700. The light slides in and clicks into the mount. A spring-loaded tab releases the light from the mount. The entire mount is attached to the handlebars via an elastic rubber strap. The stretchy rubber makes mounting to different handlebar diameters simple, and it fits most handlebars well on the default diameter setting. The diameter can be adjusted if necessary by loosening the phillips head screw on the top of the mount, and sliding in or out the plastic tab that the strap hooks onto. The rubber strap is usually easy to release, and I personally find it more convenient to remove the entire assembly, mount and all, than to release the light from the mount when removing it from the bike. The direction the strap faces when hooked onto the tab can make it a bit difficult to get the mount off sometimes, especially if the strap is particularly stretched or when wearing gloves. After I discovered the adjustable diameter, this became one of my favorite light mounts, due to its low-profile, adaptable design.

Tested to the FL1 Standard with an integrating sphere at Light & Motion, the light measured exactly 700 lumens at 30 seconds after powering on. On its highest setting, the Ion 700 lasted 1:40 hours in my FL1 Standard battery rundown test, and maintained a feeble output until just over 3 hours, before dying completely. The output remained stable for the first half hour, started dropping off slowly, and dropped exponentially in the last 15 minutes. A low battery indicator comes on after about an hour. This battery performance is typical of lights in this price and output range, and while the dim output at the end of the run is practically useless for lighting your way, it's enough that you probably won't get run over if your battery starts to die near the end of a long ride. A light with better-regulated output would maintain its initial brightness for the full run, so output regulation is another area of improvement for future releases. Fortunately, recharging is easy. The built-in lithium battery can be recharged with a standard micro USB cable. The charging port is well-protected with a solid rubber cover, unlike the flimsy covers on some USB-rechargeable lights. Overall the Bontrager Ion 700 is an impressive light in a sleek package. Its well-designed optics create a better beam than many well-established competitors, its flash patterns are versatile and effective, the mount is simple to use, and it is competitively priced. Other 650-750 lumen lights typically retail for $110-180, whereas the Ion 700 retails for $100 despite having equal or superior features. (Update May 2015: The MSRP has been increased to $120, but the light is available for $100 from some online retailers and local bike shops.) This versatile light is an excellent choice for urban commuters, casual mountain bikers, and road cyclists alike. It's a bit difficult to find online, and I've yet to see one in any of the local bike stores, but if you can get your hands on one I highly recommend it.

* Bontrager components on my primary bicycle, an aging Trek SU100, appear in many of the photos on this site. I've owned the bike for years and have had no previous contact with Bontrager before they asked to send me a light to review. The presence of the Bontrager logo in these photos is coincidence; I have no advertising relationship with the company or any product placement in general.