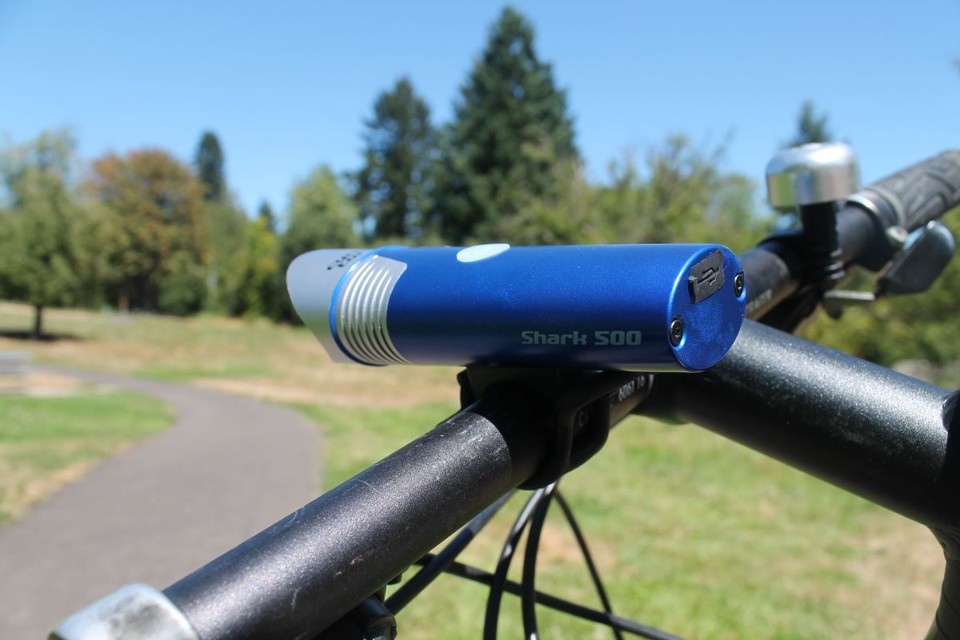 Nobody likes being blinded when riding or driving at night, and as bike light LEDs get brighter and brighter, this is increasingly a concern for road users of all types. Most bike lights, even those costing hundreds of dollars, have symmetrical beams which shine equal amounts of light above and below the device. The result is that significant light is wasted by shining far above where the rider needs to see, and as a side effect, the glare can disorient oncoming traffic.

Most dynamo lights conform to strict standards which require a horizontal beam cutoff, but few single-piece battery-powered lights do, especially those costing less than several hundred dollars. Cycle Torch's new Shark 500 light seeks to change that, introducing a low-cost light with a horizontal beam cutoff to prevent distracting other road users. Read the full review to find out how well it works. 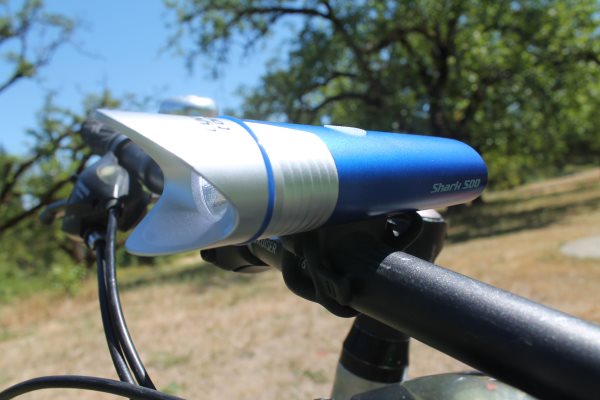 The Shark 500 is a very simple light. A standard LED with typical circular optics sits inside a basic plastic shell. The design of the body of the light is unremarkable at best. A plastic shield extends from the front of the light, shading the beam's glare both above and below. The shape gives the light its name, as it somewhat resembles a shark's head.

The shield is quite effective at cutting off the beam, and looking at the light from a distance, it's noticeably less glaring than similar lights without the cutoff. However, by choosing to use an opaque plastic shield to cut the beam, rather than using custom optics, significant light is lost. Light is merely absorbed by the opaque shield, and battery life is thereby wasted to produce light which isn't shining anywhere useful.

Perhaps the strangest aspect of the Shark 500's design is that there's a cutoff on the bottom too. I've never heard a complaint about a light that's too bright on the bottom side. By cutting off the bottom of the beam, the light only illuminates a rectangular area in front of the bike. No light reaches the space closest to the rider, immediately in front of the tires. I can't think of any good reason to do this, and it makes the light significantly less useful. The design of the plastic shield is also such that no light is emitted from the sides of the light past or even close to 90°. This results in poor side visibility, which is important for safety in busy urban environments. I talked to Cycle Shark's owner about this, and he said they are looking at different options for future designs to mitigate these specific concerns.

Cycle Torch claims the light puts out 500 lumens, but testing it in a calibrated integrating sphere reveals that it only puts out 420 lumens on its highest setting. Part of the losses may be a result of light being absorbed by the shield; however, manufacturers are expected to report lumen values for the useful light actually exiting the device. Certainly 420 lumens is sufficient for urban riding, but I was disappointed to see that the brightness was lower than claimed. 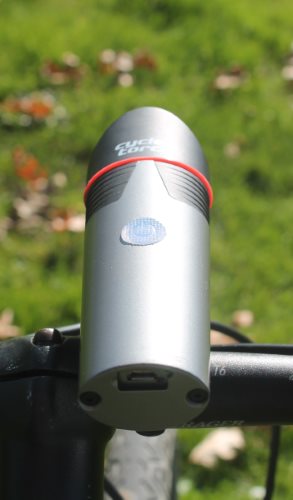 Many low-cost lights manufactured in China come with batteries of dubious quality. I've seen battery packs with recycled laptop cells, rust on the top of cells, even battery packs with some of the cells not connected! Fortunately, the Shark 500 is using a legit Samsung 2200 mAh 18650 battery. A 3200 mAh battery would result in better runtimes, but for this price range it's a decent battery.

The battery is charged via a micro USB port on the back side of the light. The cover for the charging port popped out on the very first use of the first model I tried, and I couldn't get it back in again. This provides a possible point of entry for moisture, which could damage the light. On the newer model I tested I had no problems with the port cover.

The battery life of two models I tested both exceeded the specified 1:30 hours on high, however the output of the light dropped 30% in the first 5 minutes, after which the output remained constant until the light died completely at 2:30 hours. While the FL1 Standard does define battery life as the time until output drops to 10% of the initial value, it's still quite deceptive. Even if the light actually put out the full 500 lumens advertised – and as mentioned above, the actual output was around 420 lumens – the light would operate at 350 lumens for all but the first 5 minutes of a run.

Certainly the battery life is decent on this light, but clearly the output regulation is not. The first time I tested I thought it might be a fluke with that particular unit, or an issue of an overheating light automatically stepping down the LED. After testing a second unit while actively cooling it with a fan throughout the test, I've confirmed that this appears to be how the firmware is designed. 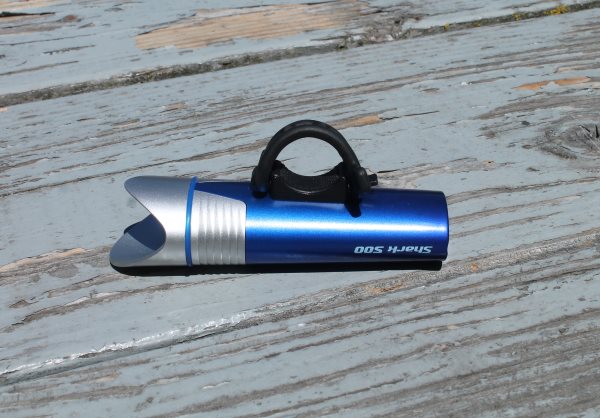 The original Shark 500 had a terribly weak mount. It was very cheaply built and difficult to use, and for that reason alone I would not have recommended it. Fortunately the mount was redesigned shortly after the light first launched, and all new Shark 500 lights come with the new, better mount described here.

The mount has two hooks over a curved rubber pad, where a rubber strap can then stretch around to grasp the handlebars. It's fairly quick and easy to move the light between bikes, but it can be difficult to get the rubber strap on and off of the hook sometimes because there is not much clearance between the hook and the body of the light. Unfortunately there is no way to rotate the light on its mount, so if you have strongly angled handlebars this light may not be for you.

When the strap is tightened down well, the mount is reasonably sturdy. It certainly doesn't feel as secure as similar strap-based mounts like those from Light & Motion or Serfas, but it isn't a problem when riding over bumpy roads. I might refrain from serious mountain biking though. 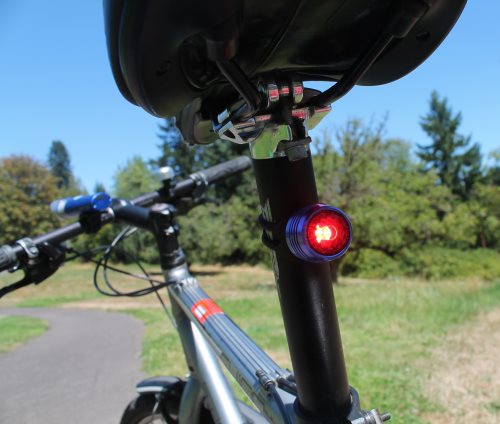 A small USB-charged taillight is also included. The light is not very bright – probably under 5 lumens. To turn the light on you press on the lens itself, which is also the button. It has a steady, flashing, and rapid-flashing mode. It uses a rubber strap to mount onto a seatpost, and does not have an adjustable angle. To charge the light you unscrew the body from the mount, revealing a micro USB port.

I would never rely on this as my primary taillight, whereas I might use the headlight on its own. I would personally prefer to just get the headlight and save a couple bucks on the purchase price, but as far as included "free" taillights go, it's better than the coil cell battery powered ones. 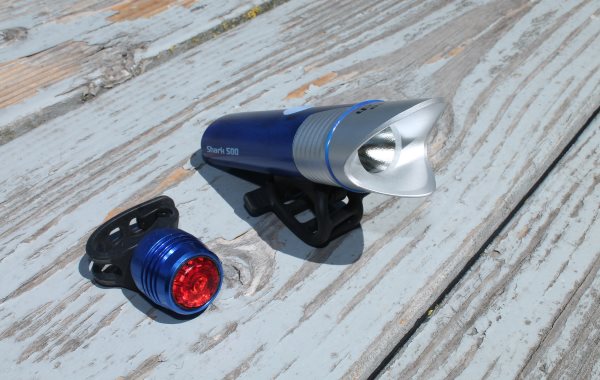 I really like what Cycle Torch is attempting to do: introduce a low-cost light with a good beam cut-off to prevent distractions from glaring bicycle lights. There really doesn't seem to be anything else like it in this price range. Compared to popular unbranded generic Chinese lights that get so much attention, the Shark 500 provides a more reliable battery, a clever beam configuration, and a convenient all-in-one package with USB charging.

The lower beam cut off is my primary problem with this light; I felt uncomfortable riding at night with this light not being able to see what was closest to my tires. For the money this is a decent value product, but I would probably end up choosing something else if I were buying myself a new headlight today.