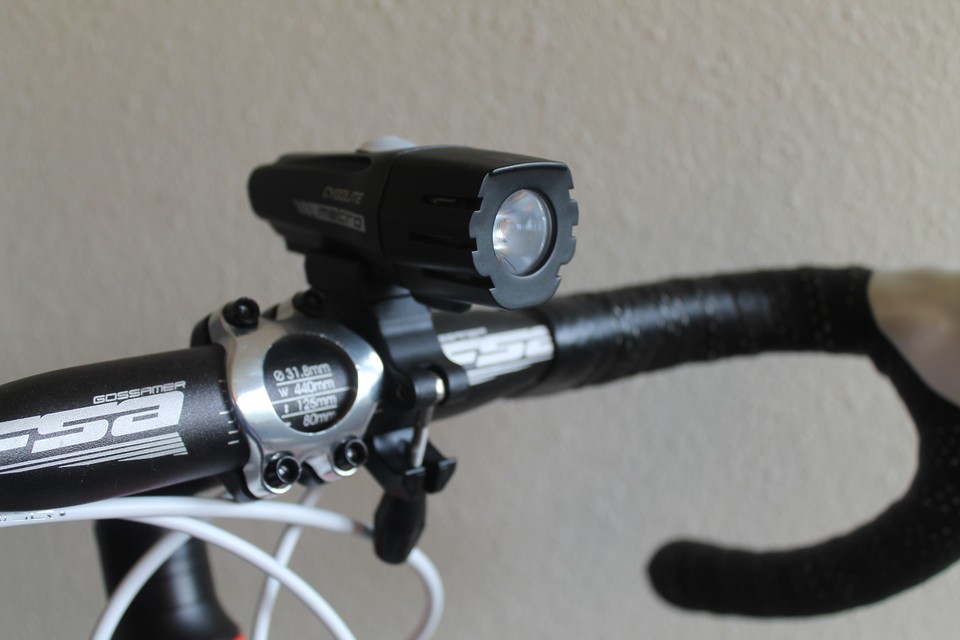 Cygolite's Metro series is widely recognized as a leader in affordable and high-quality commuting headlights. I first reviewed the Metro 300 back in 2011, and have been a fan of the lights ever since. Five years later, the Metro looks identical from the outside – same shape, size, and weight – but Cygolite is pushing the technology inside to perform at new levels. The Metro 750 puts out up to 750 lumens, has different flash options optimized for daytime and nighttime, and is the company's first commuter headlight to implement their "enhanced cycling optics" for a smoother and better shaped beam. If you've used and enjoyed previous Metro lights and are looking for an upgrade, you'll like the Metro 750. If you're looking for more info, read on to get the full story. The Metro 750 is the first (and currently only) light in the series to have what Cygolite calls its "enhanced cycling optics". It's a fancy name for a simple solution: adding a diffusing lens to the beam. Most lights have a symmetrical circular beam, meaning as much light gets shined into the sky as onto the ground. A diffusing beam widens and flattens the beam shape, making it more rectangular instead of circular. This uses the LED's output more efficiently, lighting up a wider path and reducing glare into the eyes of oncoming people.

The beam shape of the Metro 750 is well-designed, providing enough spill to take dark corners at speed while projecting far enough to not worry about outrunning the beam. The light is a neutral white, unlike some lights which have a more bluish tint. Side visibility is decent, although it could be better. Small slits on the sides emit some light perpendicular to the beam, but the side visibility is not as good as lights which have full side markers, like the L&M Urban series or the Fenix BC21R.

In addition to four brightness levels, the Metro has two flash patterns. Cygolite was the first to introduce separate flash modes for night and day. The nighttime mode, called "steady pulse", keeps the steady beam on at low output, and about once per second pulses brighter a few times in a row. This helps keep the road illuminated while also providing an occasional flash to grab the attention of nearby drivers. I usually prefer to ride with my light in steady mode at night, but I do frequently use the steady pulse mode around dusk and dawn. The daytime flash mode is much brighter, flashing at 500+ lumens continuously. This mode would not be safe to use after dark, as it would be very distracting both to people nearby and to the rider. During the daytime it's awesome though – it's bright enough to catch attention even when competing with direct sunlight. Studies have shown that daytime lighting reduces the likelihood of being in a collision, so I always ride with a light on. Cygolite was among the first light manufacturers to offer USB charging, and charging the Metro series hasn't changed since the original Metro 300. While most USB-rechargeable consumer products have moved to micro USB, all of Cygolite's products still use mini USB, which is a similar-looking but differently-sized plug. As somebody with more micro USB powered devices than I can keep track of, it's a non-trivial frustration having to hunt for the right cable when I want to charge this light. Some lights now offer fast charging, but this light isn't one of them, so you'll need to plug it in overnight to charge it up fully.

The light's button has a small colored LED inside, which starts flashing when the battery gets low, and eventually turns red if the battery is about to die. It is nice having some advanced warning that the battery is running down, but I much prefer the clear green/yellow/red progression found on Light & Motion's lights – it's much more obvious what state the battery is in.

The Metro 750 has decent battery life, lasting 1:40 hours before dropping below 10% of the initial output. The output is initially well-regulated, with the output still at 95% after one hour. After the first hour though, output quickly drops as the light can no longer keep up with the dropping battery voltage. While I have not done the quantitative output test at lower levels, I would expect to see the regulated output remain steady for much longer in the medium and low power modes. Riding with this light I hardly ever felt the need to go into the highest mode; I almost always rode with either the steady-pulse mode or the low output mode. In low the light can last 16 hours, and in the even lower "walking" mode (which only puts out about 50 lumens), it can last 150 hours. Cygolite has made a subtle but important change their headlight mount sometime since I last tested their lights. The mount's rigid plastic handlebar clamp now has a rubber pad built into it, significantly improving the grip on the handlebars. Before this change, Cygolite mounts tended to slip if they weren't regularly re-tightened. The new mount feels much more secure. The mount is tightened by a nut which can be turned by hand. Taking the light on and off of the mount is quickly and easily accomplished by pushing a small plastic tab on the mount. For larger handlebars you can remove the rubber pads (which are re-insertable) and loosen the nut all the way. I was able to fit the mount even on the large and asymmetrical bars of my road bike. A single button on the top of the light controls all of the functions. The button is easy to use, even with thick gloves on. Push and hold turns the light on and off, and a single press switches modes. The light has six different modes, including four brightness levels and two flashing modes. When you first turn it on, it defaults to the 2nd-lowest non-flashing mode. Subsequent presses increase the brightness, then switch to steady-pulse, daytime flash, and finally the dimmest steady mode. The light has no button lockout, although I haven't had any issues with the light turning on in my pack unexpectedly – the button doesn't easily activate unintentionally. Cygolite products are widely praised for being a good value, and I'd tend to agree. The "best" light of course depends on your needs as a cyclist, but the Metro series is hard to beat in terms of features and price. The most obvious comparison is to Cygolite's own Streak series. The Streak lights are nearly identical to the Metro series, but are a bit smaller, using lower capacity batteries and smaller LEDs. The Streak 350 is the current version of the series, and has all the same features as the Metro in a smaller package. If you're on a tight budget and can't afford the Metro, the Streak is a great choice at just $50 (and often available online for less).

The Fenix BC21R is a new light just released this winter, and provides strong competition against the Metro series. It's a bit cheaper at just $75, and it features a removable standard 18650 battery, which can be replaced on the go by the user, and can be charged in the light via micro USB or in an external charger. This brings a whole new level of battery flexibility compared to sealed lights like the Cygolite Metro, or lights with a removable battery wrapped in a proprietary case, like Cygolite's Expilion series. The BC21R's mount is in my opinion easier to use than Cygolite's, and the light has side visibility LEDs. The flash options on the Metro are better though – the Fenix light has a similar mode to the steady-flash on the Metro, but has no daytime flash mode. Overall it comes down to personal preference; both are a good deal.

Light & Motion has also dropped the price of their Urban series lights in recent years, making them more cost competitive with the Metro series. The Urban headlights have better optics than the older Metro lights, although the smooth diffusing lens on the Metro 750 is nearly comparable. Like the BC21R, the L&M Urban has side visibility lights which are much more visible than the small slits on the Metro. The Urban also has a smooth pulsing mode which is much less disorienting than either of the Metro's flash options. The Urban does lack a daytime flash mode though, which is unfortunate.

Overall, the Cygolite Metro series continues to be an excellent valued light. Competition is fierce in this market, and Cygolite is doing a good job of keeping their products up to date.