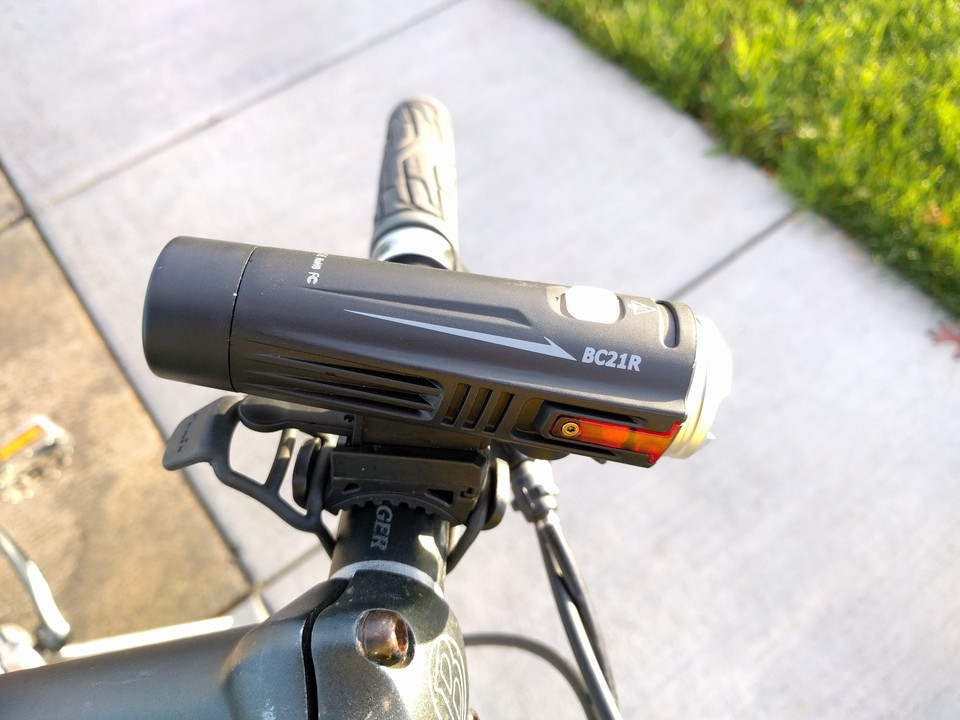 The BC21R is Fenix's first light which offers both a user-accessible 18650 lithium battery and built-in USB charging. This allows the rider to swap out batteries during the ride, and to charge the batteries in the light or with an external charger.

Review: User-replaceable 18650 battery with USB charging at a price that can't be beat

Rapidly-improving LED technology has brought us brighter bike lights, and lithium batteries have brought us easy charging, but the #1 complaint I hear from people considering a new bike light is the inability to replace the batteries in modern rechargeable lights. Most of these lights are a sealed package, much like smartphones which aren't designed to be opened up. Whether the battery runs out during a long ride or just can't keep a charge after years of use, there are legitimate concerns over the practicality and environmental impact of single-piece rechargeable lights.

Enter Fenix. Best known as a cost-effective high-performance flashlight company, they've been gradually increasing their array of bike light options over the past few years. I reviewed the BC30 this fall, their first single-piece bike light with user-accessible standard-sized 18650 lithium batteries. The BC30 had a few shortcomings though: the batteries must be removed to be charged, both batteries and a charger must be purchased separately from the light, and it's a pricey light once you add in all those extra purchases. It's also overkill for most riders — at 1200 lumens and with two batteries, it's more appropriate for hardcore trail riding than urban commuting.

The BC21R, just released this winter, addresses all of these issues and more. It weighs in at just 152 g, has side LEDs to improve visibility from off-angles, has an easy to use rubber strap mount, it comes at a very competitive price, and most importantly it nails the battery setup almost perfectly. If you haven't already left to go get one, dive into the full review to find out why you should.

Special thanks to BestLight.io for providing a BC21R for this review! All of their bike lights, flashlights, batteries, and other products are 10% off with the coupon code BLDBFAN when you follow this link. That puts the BC21R at just $68! 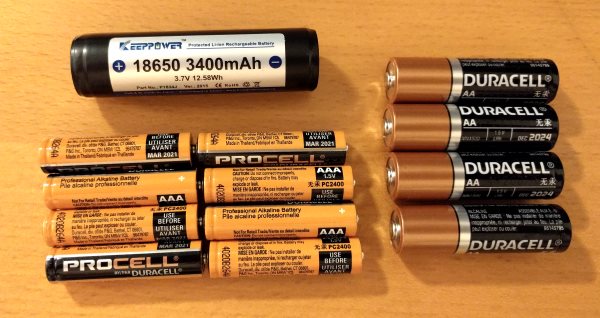 Most rechargeable lights (and plenty of other things, like laptops and Tesla cars) use standard 18650 batteries inside. They have about 4x the energy density of AA batteries and have better performance. Somehow, the bike light industry tends to keep them sealed up and difficult to access, whereas in the flashlight industry most lights have removable batteries and no on-board charging. What Fenix has done with the BC21R is bring these two styles together. 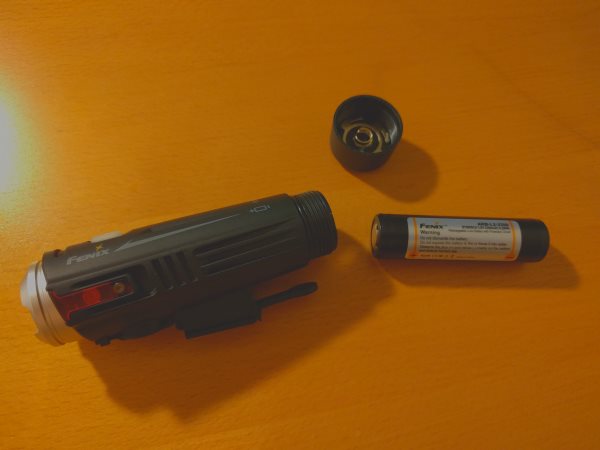 A single 2300 mAh protected 18650 battery is included with the light. You can unscrew the back end of the light to easily slide it out and pop in another. Any 18650 from any (safe/legitimate) vendor will work. You can charge the battery on board through the micro USB port, or you can charge the battery in any 18650 charger. This makes it easy to carry spares and charge them as needed, while still having the convenience of charging anywhere via USB. You can get 18650 batteries in capacities up to 3600 mAh, which will get you even longer runtimes. For some battery recommendations, see the 18650 battery section of the FAQ.

Runtime on the BC21R is decent, and actually slightly better than some other lights in this output range. The battery lasted 2:25 hours before dropping below 10% of its initial output, but output dropped steeply after 1:00 hours, going down to about 35% of the initial output. As with many 800+ lumen lights powered by a single battery, it can't maintain the full output for the full runtime. Available LEDs can't quite sustain that output from a single LED much below the fully-charged battery voltage. Battery voltage decreases as the battery drains, and most manufacturers don't add a boost converter which is necessary to maintain the required voltage. 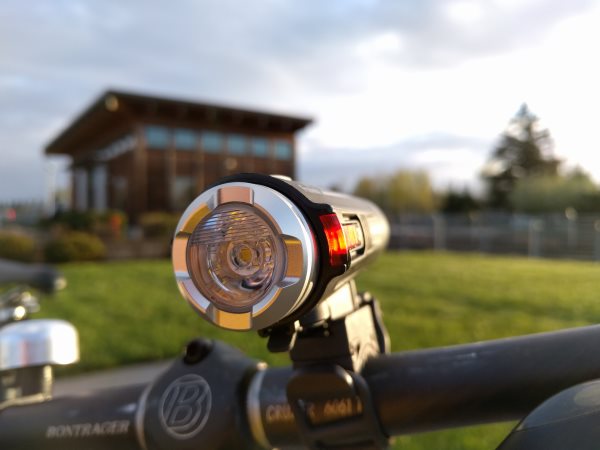 The BC21R uses Fenix's "dual shape beam" technology, which uses a small diffuser near the top of the lens to reduce glare and focus more light on the road. In terms of keeping light on the road and out of oncoming people's eyes, it's not a substitute for an indirect reflector light like the B&M Ixon Core but it is better than the average bike light. The hybrid beam design is effective – it's a good middle-ground because it provides enough throw to reach a long distance in front of the bike, while also providing enough flood to see things that aren't directly in front of you.

There is a red side-visibility LED on each side of the light, facing outward at a 90° angle. This gives the light over 180° of visibility. Lack of side visibility was one of my few complaints with the BC30, so this is a welcome addition, especially for urban riders.

In flashing mode the main LED stays on at the low setting, and then flashes brighter a couple times per second. This lets you use the flashing mode at night or at dusk while still having light to see by. Unfortunately there is no specific daytime flash mode. 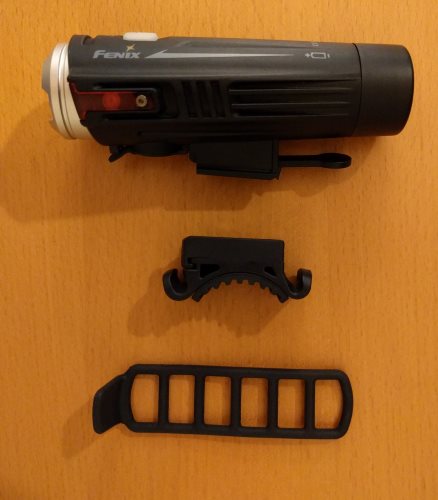 Previous single-piece Fenix bike lights have used very bulky but sturdy mounts which clamp onto the handlebars. The BC21R uses a rubber strap mount which is not as stable but is easier to use. The light slides into the plastic mounting plate, and is kept in by a small tab. To release the light, just depress the tab. A rubber strap hooks into the mounting plate and wraps around the handlebars. The strap is ladder-shaped, letting you adjust the tightness of the strap by choosing which "rung" to slide into the hook. This mount design makes it easy to take the entire light, mount and all, off your bike – a welcome feature for people riding in theft-prone areas. I did occasionally have issues with the mount slipping and light moving around when riding over very bumpy terrain. Because the strap can only be adjusted to discrete positions, I had to move the position of the light on my handlebars to get a good match between the handlebar diameter and the nearest-sized rung on the rubber strap.

The single button on top of the light is easy to use. Press once to turn on the light, press once to switch between modes, and press-and-hold to turn the light off. There doesn't appear to be any kind of button lockout mode, but if you're worried about the light coming on in your pack, you can always just pull the battery out.

At only $90 MSRP and typically sold for $75, this light is the new winner for best valued headlight. No other quality light delivers 800+ lumens in a sub-$100 package, and very few other lights have the option to use standard 18650 removable batteries. If you need battery flexibility it's an obvious choice, and even if you don't require long runtimes it's still a good value regardless.

Features-wise, the L&M Urban 800 is probably the closest competition. It too has a rubber strap-based mount, although I do prefer the Urban's mount to the BC21R's. The Urban has amber side visibility ports, which operate slightly differently: rather than have 2 separate LEDs drawing more power, its side ports are actually cut through the side of the light and covered with amber plastic, illuminated by the main LED. This design is more energy efficient and I also prefer the amber color. Both lights suffer from the same drop in output caused by battery voltage regulation challenges. The BC21R wins hands-down in the battery department: The Urban's battery is entirely sealed up inside and impossible for the user to replace themselves. The BC21R wins on price as well, at only a $90 MSRP vs. the Urban's $130. The Urban is made in the USA though whereas Fenix lights are imported from China, and you can get a fast-charging version of the Urban 800 for $20 more, an option not presently offered by Fenix.

If you need a slightly higher-tier light, the Fenix BC30 is another good bet. It lacks on-board USB charging, but it takes 2x 18650 batteries and puts out up to 1200 lumens for 1:30 hours and can run for over 20 hours on low. The heavier but more secure mount and lack of side lighting make the BC30 a more compelling choice for riding on trails, while the BC21R is better suited to urban riding – however, either is a great light and will work well in both applications.

BestLight.io generously provided the BC21R for this review. In addition to selling Fenix products, BestLight also sells a wide range of quality flashlights and batteries from reputable manufacturers. You can get 10% off your entire purchase using the coupon code BLDBFAN. (BestLight is a Fenix dealer, but is not affiliated with Fenix otherwise.)