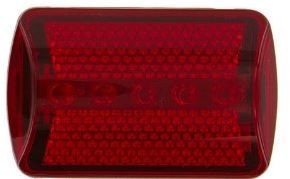 This light is literally the cheapest light I could find. I went on Amazon, found the bike lights store, sorted by “lowest price,” and this is what came up. Unsurprisingly, this $3 light was not particularly bright, but it was better than I expected. It put out 800 lux, placing it ahead of the more expensive Knog Frog, and almost on par with the Cateye Reflex.

The light comes with a simple seat post mount. It’s powered by AA batteries, which are a bit of a rarity in the tail light arena. The upside of its low brightness and larger batteries is that it lasts a long time. It held on for 81 hours before starting to lose its luster, and kept going for another 40 hours after that.

The 6 in the name refers to flash modes, not LEDs as I had originally expected. The LEDs are obviously not of the highest quality – other 5-LED flashers such as the PB Blinky 5 and PDW Red Planet far outperformed this light. The flashing modes consist of a fast mode and a slow mode with all 5 LEDs, and a variety of modes which alternate the LEDs. The alternating modes seem rather useless, as having fewer than all of the LEDs turned on makes the output even dimmer than it was to begin with, but the first two modes work well enough.

For $3, this light isn’t bad, but it’s certainly not going to give you great visibility. If you’re strapped for cash and are in the position of “something’s better than nothing,” then buying three of these for the cost of a single brighter light might not be a bad idea though – it’s generally recommended to have at least two lights, each mounted at a different level, to improve visibility. I would generally advocate for buying brighter lights, because the costs of medical treatment if you ever get hit will far exceed the cost of a $20 light, but there is definitely a place for cheap lights like this one, and this performs well for such a ridiculously low price.