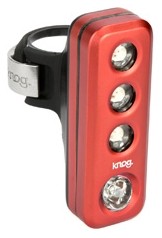 The Blinder Road lights feature two LEDs in a single attractive package. One LED is behind a wide-angle (22°) lens, and the other is behind a spot (15°) lens. The lights can be switched between both wide and narrow beams at once, only wide, only narrow, an alternating flash, or 1 flashing 1 steady combo mode. Separate buttons toggle brightness and which beams are active. The lights strap on with Knog's signature silicone band and a study metal clasp. The Blinder Road series lights also come with a USB extension cable to facilitate plugging in the built-in USB charging plug.

The Blinder Road Rear features a single high-power LED and three lower-power LEDs with wide and narrow optics to provide side-visibility and visibility from a distance.