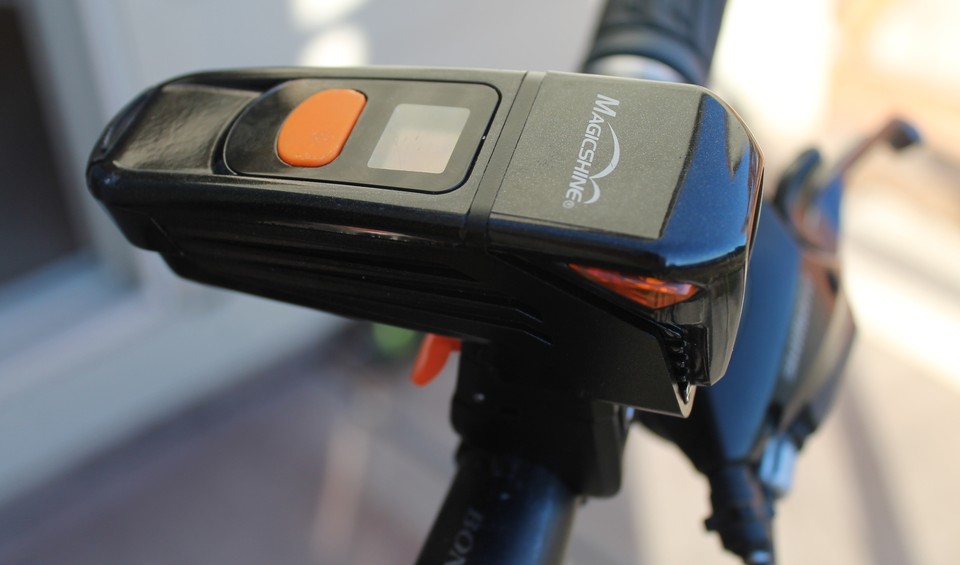 Review: OLED battery display is a novelty, but dubiously worth the price

When MagicShine announced the Eagle 600, bike blogs and twitter feeds were abuzz about its OLED display that shows how much runtime the light has remaining. Although some other lights feature color-coded battery indicators, none before has literally told you how much time is remaining.

Battery life is important, and knowing how much time you have to get home before you're left in the dark is a welcome feature. But a light is much more than its battery display. The Eagle 600 gets several key features right that other lights lack, but also falls short in some critical areas. I'll get to a detailed analysis of that famed OLED charging display, but first let's discuss the other unique features of this light. I'm a big fan of lights that go beyond a simple tight circular beam. To me, the Eagle 600's best feature is in fact its dual beam functionality. It has two LEDs, each putting out 300 lumens for a total of 600. The top LED has a standard spot lens, projecting the beam far into the distance. The lower LED has a diffusing lens, creating a wide swath of light up close.

The secret killer-feature – and my favorite thing about this light – is that you can switch off the upper spot LED and leave the lower flood LED on. This is perfect when biking on shared paths or near oncoming traffic, because it gives you plenty of visibility up-close but doesn't blind people going the opposite direction. I wish the flood beam had a slightly lower cutoff, as it's still pretty bright to look at, but it's a big improvement over the dozens of lights that seem to be designed with hardly a thought towards other road users. There are also orange side cut-outs where light from the two LEDs can show through, providing side visibility. In total the light has 9 modes: four brightness levels each for dual beams or only the low beam, and one flashing mode. To change brightness you press the switch quickly, and to switch between beam modes you press and hold the button for about 1 second. Turning the light off requires an approximately 3 second push. It took a few tries to get the timing right to switch modes without turning the light off, but once you get the hang of it, it's quite easy.

It's also worth noting that MagicShine has tested this light on an integrating sphere and verified that its output is 600 lumens. Many manufacturers, especially from overseas, overstate their lumen specifications by significant amounts, and it's good to see MagicShine setting an example by testing their output.

The light's mount is extremely stable, but has a couple significant downsides. A thin rubber-coated metal strap that snaps into place holds a plastic mount to the handlebars. The strap is then tightened with an included hex wrench. Once attached, the mount is extremely sturdy the light doesn't have any undesired movement. The metal bands are available in 3 lengths which can span bar diameters from 20.5 to 32.5 mm. Seating the light into the mount is dead-easy once you figure it out, but not intuitive at all. The light must be put in at an angle, with the front edge placed into the mount, then rotated down until it clicks into place. To release, just press the orange tab and rotate the light up from the back to lift it out.

The downsides? First of all, the mount is in no way quickly removable. The light itself is quick to remove, and that's fine if you use one bike for everything, but if you have more than one, moving the light between your rides is going to be quite the hassle. I much prefer all-in-one mount systems like those found on Knog, Serfas, and Light & Motion lights, but even mounts that attach semi-permanently to the bike like those on Cygolite, NiteRider, and Planet Bike's products can be removed without tools. The other issue is that the light sticks up very far from the mount. While it doesn't cause much in the way of functional issues, it's a very bulky attachment for an otherwise sleek product.

So... how about that battery and its nifty display? I found that the OLED battery display actually displayed less remaining runtime than there really was – probably a good thing, since you don't want to get stuck with a dead light unexpectedly. It took me a while to figure out how the display works, and it's not particularly intuitive. When you first turn the light on, it displays the percent remaining. After running for a minute or two, it'll switch to showing the estimated time remaining. I assume that it can't display the estimated time until it calculates how much power it's drawing. Once it displays the expected time, you have to switch modes in order for it to show the percentage again, and it'll automatically switch back to the expected time after about 10 seconds. The light lasted 1:40 on the highest setting with both LEDs enabled, and predicted 1:18 when the light first turned on. The light dimmed slightly towards the end, which may account for the longer runtime than predicted. An hour and forty minutes is about average for lights in this size, brightness, and price range.

As the battery drained, the predicted time went down linearly for the first 25 minutes, closely paralleling the original prediction. By 30 minutes into the test, the predicted lifetime was only decreasing about 4 minutes for every 5 minutes that passed. The final drop occurred fairly quickly, but with ample warning.

After riding around with the light, I have mixed feelings about the battery indicator. It's definitely useful to know "exactly" how much time you have, but the constantly-backlit display is also distracting and likely uses up some battery power that could go towards actually powering the light. The display is also essentially non-interactive; you have to switch modes to change from time to percent, and these are the only two stats shown. There is a lot of potential here though: what if there were a second button to control the display. Pressing it once could turn on the display, and pressing multiple times could cycle through stats like percent battery, time remaining, and % output of total brightness. In its present form, you could get just as much information from a row of 10 minuscule LEDs acting as a battery level indicator. The display seems somewhat like a gimmick, but future iterations could be very useful indeed.

The Eagle 600 is sturdy enough – I dropped it on pavement several times and it sustained no significant damage – but it's built from glossy, cheap-feeling plastic, not sturdy aluminum and stronger plastic like on much of the competition. While it houses some innovative features, this light simply does not feel like it should cost $160. A lot of that probably has to do with the cost of the OLED display necessitating cheaper materials elsewhere. Ultimately, there are other lights in this price range that I think deliver more for the money. That being said, MagicShine deserves recognition for the unique innovations in this light, and I expect future iterations to further raise the bar.