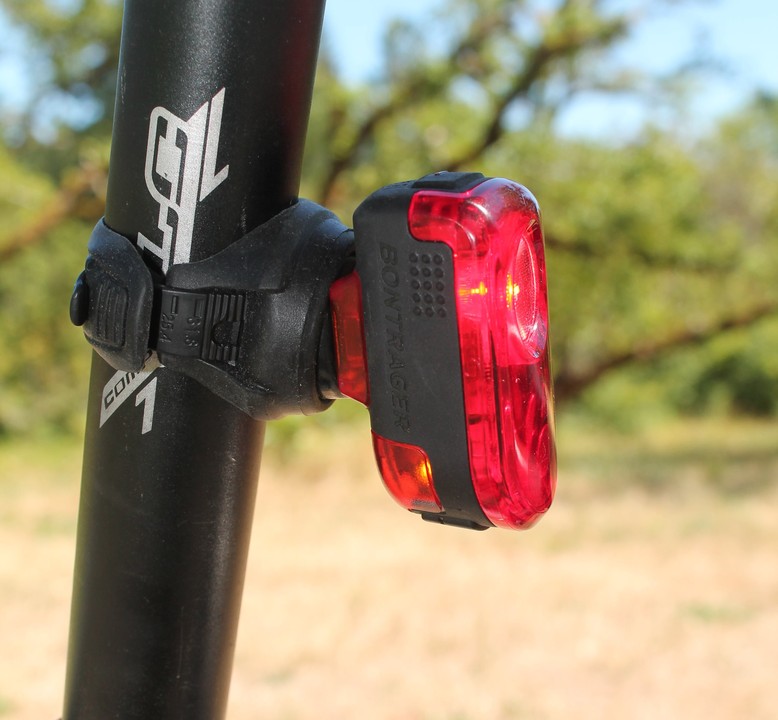 The Flare R is a rechargeable taillight. It has two steady burn modes with the brightest at 25 lumens, and two flash modes which both peak at 65 lumens. The light is specifically designed for flashing daytime visibility, and has amber side LEDs to be seen from all directions.

Review: A quality light with a questionable mount

Bontrager recently entered the high-powered bike light market with a bang – their Ion 700R headlight quickly made its way to our top headlights recommendations list for its sleek design, nice optics, good mount, and excellent value. The Flare R is Bontrager's first attempt at a modern taillight, and features many of the same well thought-out designs that were introduced with the Ion. The competition is tough though, especially for a $60 light, so let's see how the Flare fares.

First, to clear up any confusion: Bontrager advertises the Flare as being a 65 lumen light, but that's only in the highest daytime flash mode. The steady-high mode only puts out 25 lumens, putting it on par with lights like the Cygolite Hotshot. To be clear, 25 lumens is not bad for a steady mode, especially at night, but the prominence of the "65 lumen" advertising feels slightly misleading. We'll get to the details of those flash modes in a moment.

The actual optical design of the light is pretty good. The lens has a diffuser built in to cast an even beam in all directions. The Flare's diffuser is radial, meaning it spreads light out in an even cone. I would've preferred to see a linear diffuser like on the NiteRider Solas series, as I believe that uses the light more efficiently. In addition to the primary red LED, there are smaller amber LEDs on both sides, similar to the Light & Motion Vis 180. Bontrager claims this gives the light 270° of visibility; if anything the actual angle from which the light is visible may even be larger.

I was overall impressed with the mode options. There is a steady-high and steady-low mode. The low mode is appreciated, as it gives a less-blinding option for when you're riding in the dark with a group. There is also a daytime flash mode and a nighttime flash mode.

The day flash mode gives two bright flashes, followed by a slightly dimmer triple strobe. In the nighttime flash mode the light is constantly on at a low level, with a brief strobe flashing about 2 times per second. In daytime mode the side LEDs alternate with the main LED, and in nighttime mode they strobe when the main LED does. I think that the amber side LEDs would be more effective if their daytime and nighttime modes were switched. Their quick strobing would make them stand out more against a brighter background, and the subtler alternation with the main LED would be better suited for night. The flash patterns do seem to work well overall, and I really appreciate Bontrager's specific attention to daytime visibility.

As with many lights these days, the Flare R has an internal lithium battery which is charged via a micro USB port. The port has a stiff rubber cover which seems reasonably rugged, but could come off or leak after a few years of use.

The Flare R's output is very well regulated. The output stayed perfectly constant for the entire 4:15 runtime in our FL1 Standard battery test. The light actually lasted just under 4:20 hours, slightly exceeding the specifications for 4:15 hours. This is measured on the highest steady mode, which is 25 lumens. This runtime is decent for this size and price range, coming in 30 minutes under the 4:45 hours for the Cygolite Hotshot at 30 lumens. The Light and Motion Vis 180 lasted 15 minutes shorter for 4:00 hours, but also put out nearly 3x as much light at 70 lumens.

A small status LED is built into the button on the top of the light, and turns from green to red when the battery starts to get low. The bright red light coming from the main LED can make it difficult to see the status LED and determine if the battery is low, so you must look closely to check the battery status. When charging the indicator LED flashes, then turns solid green when charging is complete. Charging takes about 5 hours and the Flare R cannot be used while charging. 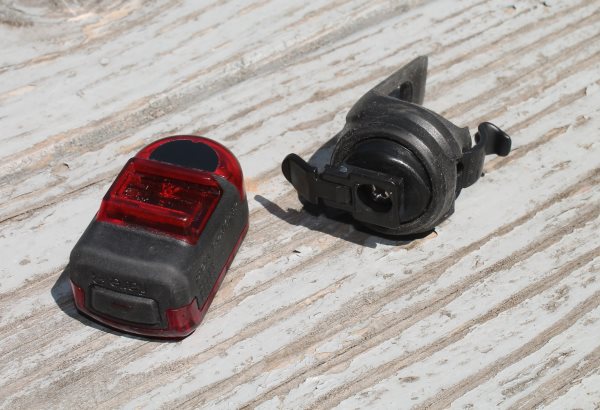 I really liked Bontrager's headlight mount for the Ion 700, and the Flare R uses a nearly identical mount. I feel like this particular mount design, though effective for headlights, does not work very well for taillights compared to other mounts I've used. The mount only works on a seatpost, and the angle of the light relative to the seatpost is fixed. The mount seems to be designed to hold the light level at a 70° seatpost angle, so if your seatpost is significantly different you may have problems. There also is no rack mount or stay mount available for this light. The lack of mounting flexibility really restricts the options for using this light. The good thing is that the mount is stable and easy to attach and detach quickly, so there's no problems moving the light between bikes or taking it with you when locking up to prevent it from getting stolen.

The light is controlled by a single button on the top, which as a small indicator LED built in. Switching between modes is easy, and I never have a problem registering clicks. It might be more difficult to activate the button when wearing thick gloves without looking. A single quick press turns the light on and cycles through modes; pressing and holding turns the light off, and it remembers the last used setting. There is no button lockout or delay to prevent accidental activation of the light, but I've had no issues with the button being pressed while carrying the light in a pannier or backpack.

Overall this is a very nice light, but it doesn't have the awesome value that the Ion 700 does. The flash modes are effective, but the maximum output and battery life fall short of other recent taillights which cost less. The mounting options also leave a lot to be desired. It's difficult to justify paying $60 for the Flare R when a Cygolite Hotshot can be bought for less than half as much with higher output, more mounting options, and longer battery life.