Cateye's Rapid series offers a variety of lights designed for safety visibility, including their full taillight lineup. The Rapid X2, which we reviewed in October, is the high end option, offering a 50 lm output and six flash patterns. The Rapid Mini is a new product targeting the low-cost and light-weight market. It weighs just 22g, vs. 31g for the Rapid X2. It sports a 3 hour battery life in constant mode at 15 lumens, and lasts up to 30 hours in flashing mode.

While many of the taillights being released these days are designed for daylight visibility and more extended runtimes, the Rapid Mini is really only useful for nighttime riding. I would be hesitant to use it as my only light while riding on high-speed streets with lots of motorized traffic, but if you're mostly riding on slower streets and don't want to break the bank, it'll do the job.

The Rapid Mini includes all the same flash patterns as the Rapid X2 (albeit at a lower output level), which you can see in the flash pattern demo on the Rapid X2 review. Although the light itself is small, it's still attention-grabbing – especially in the "rapid" flashing mode. 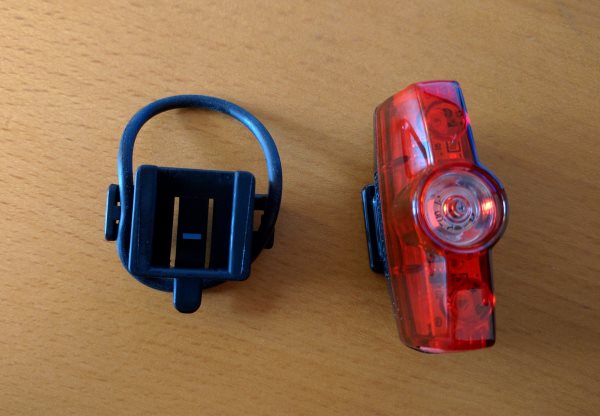 Mounting is fairly straightforward. The light has a square knob on the back side which slides into the mount, allowing the light to be mounted vertically or horizontally. The mount attaches to a seatpost or seat stay with a thick black rubber band. The angle of the mount can't be adjusted, but an angled rubber spacer is included to ensure the light is parallel to the ground with an angled seatpost. The mount is quick and easy to swap between bikes, and it's easy to pull the light out of the mount too. When swapping the mount between bikes though, you must be careful not to lose the rubber spacer.

Using the light with gloves on is a bit difficult due to its small size. I had trouble switching the mode or turning the light off and on, and ended up having to take my gloves off sometimes. For those who typically ride in winter or have larger hands, you may want to look for something with a beefier button. 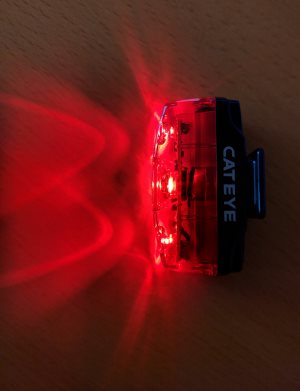 I think the Rapid Mini is somewhat overpriced at a suggested retail price of $30. For that much you can get a light with 2x the output and 2x the battery life, like the Cygolite Hotshot SL 30. The Rapid Mini is sometimes on sale for $5-10 cheaper than MSRP, and at $20 the price is competitive with the feature set. For those especially concerned with weight and who just need a simple light in case an afternoon ride goes longer than expected, it's a compelling option. For people needing a light for daytime visibility, riding on busy streets, or doing long rides at night, there are better lights for your money.