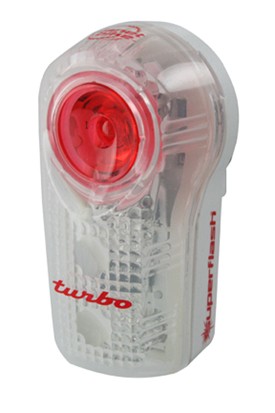 Planet Bike's original Super Flash was the first bike taillight to use a high-powered LED that did more than just subtly wink at the cars driving by. Designed with a powerful primary LED and two secondary LEDs to ensure that something's always flashing, the Super Flash lights use a unique attention-grabbing strobe flash to draw drivers' attention.

The Super Flash Turbo was the first major update to the series, bringing in a new, brighter 1W LED while keeping the same trusted design from the original Super Flash.

Planet Bike recently updated the Super Flash Turbo in conjunction with the release of their new Blaze 2W Micro headlight (review coming out next week!). The new Turbo seems to be almost exactly identical to the old one, with one important difference: the switch. The switch on Planet Bike’s taillights has always been a point of frustration – the plastic would often crack or stick, making it hard to turn the light on and off. The new design has a rubber switch that gives a reassuring “click” when you push it. It seems much less sticky and has better tactile feedback. I’ve only had the new Turbo for a couple months, so it’s too early to evaluate its durability over years of use, but already it’s been a significant improvement over the previous versions of this light. Planet Bike has also informed me that all of their other Blinky series lights with the same design (PB SuperFlash and Blinky 7) have the new switch as well.

The old Super Flash Turbo on the left, compared to the new switch design on the right.

Review: Just like the Super Flash we all know and love, but brighter

While the original Super Flash is starting to show its age, the newer Super Flash Turbo is an impressive adaptation of its older sibling. Although it looks almost identical at first sight, it doubles the power with a 1-watt primary LED, and is blindingly bright. The first time I rode with the Super Flash Turbo on my bike, I was surprised to see it lighting up stop signs 4 blocks behind me. For all of the brightness measurements, I set the lights to solid (non-flashing) mode, because the light meter is not precise enough to capture brightness over the short period of time of a single flash. For each of the lights I attempted to get some data in flashing mode, and was surprised to see that for the Turbo, it shined brighter when flashing than when solid. In flashing mode I measured a max of 12,000 lux, making this one of the brightest lights available. The light also had very good side visibility. This added brightness comes at the price of battery life though – the light only lasted 24 hours before dimming, although it kept flashing weakly for nearly a week after it lost its initial luster.

It was always very easy to replace the batteries in my trusty ol’ Super Flash, and I expected the same of this light. As it turns out, the casing on the Turbo is much more rigid, and cannot be opened by hand – it requires a coin to twist in the opening slot to leverage the case open. This may be in response to customers’ complaints of the casing coming apart too easily, causing people to lose their lights. The downside is that makes it hard to replace the batteries quickly if you don’t have a coin handy. Not a huge issue, and arguably an improvement, but definitely a difference between this and other PB lights. Overall the Planet Bike Superflash Turbo is a very strong light. Its flash pattern is random and attention-grabbing, even more so than its predecessor’s, and it’s a drop-in replacement (or good accompaniment) to an existing