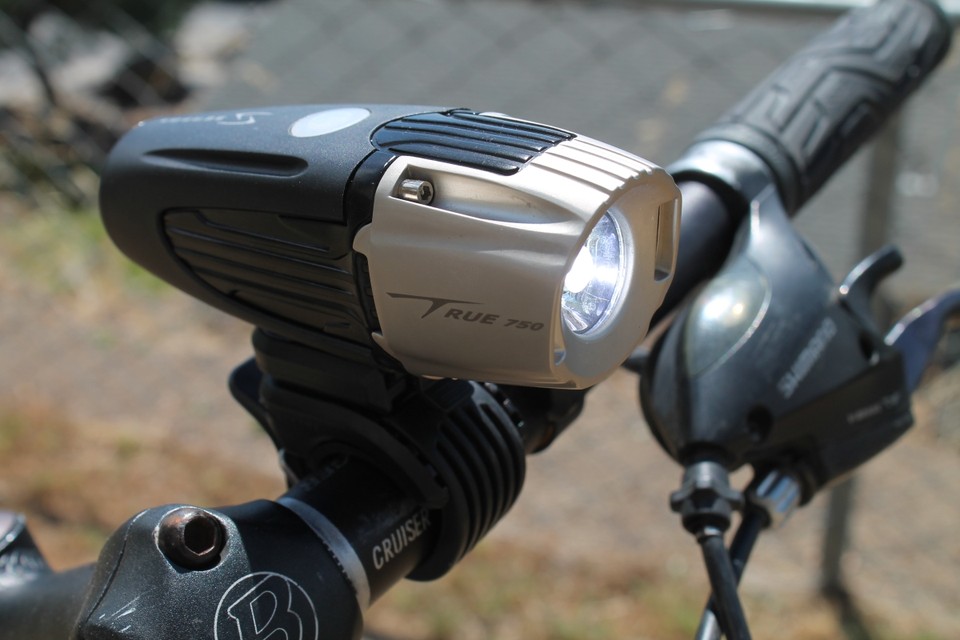 The latest in Serfas' USB-rechargeable TSL line, the TSL-750 is the first light to feature an interchangeable lens which can be swapped out between a flood configuration and a spot configuration to meet the demands of each ride. The TSL-750 also has a quick-release internal battery so you can bring extra power with you on longer rides.

Review: Though adaptable, TSL-750 may be more trouble than it's worth

The TSL-750 is the first Serfas headlight I've tested since the TSL-S500 I reviewed last year. It has the same conveniently removable battery and handy mount, and a similar overall design. The 750 however is significantly bulkier than its predecessors, and weighs in at a hefty 195g, nearly 50% heavier than the TSL-S500. My primary complaint with all of the Serfas TSL lights I've tested is the extremely focused beam and lack of side visibility. Unfortunately, the TSL-750 comes with a similarly narrow spot lens installed by default, creating an extremely bright yet very small circle of light that I didn't find useful for riding on roads or trails. However, Serfas is trying something new with the TSL-750: a wide "flood" lens comes in the box, and can be swapped out by the user. Swapping out the lens is not difficult, but it can't be done on the fly, and isn't epitome of user-friendly either. I'll go into a bit more detail on the lens swap process itself below, after describing the differences in using the two optics.

The spotlight optics that come installed out-of-the-box are simply too narrow. I can't envision any type of riding where I would want a beam that tight. When riding on roads, it only lights up a tiny strip of pavement directly in front of you, making it impossible to see any potential obstacles that aren't directly ahead. On a path it's not quite as bad, since paths are generally narrower to start with, but still seems too tight. The light forms a super-intense puddle that over-saturates your eyes and wipes out your night-vision, making it impossible to see anything outside its narrow beam. For any type of riding, going around corners is scary because the light is so focused that you can't see anything as you turn. The only real application I can see for the spot optics is as a helmet light – a tight beam like this can be very useful for pointing in a specific direction that you want to see. I used the Serfas TSL-200 as a helmet light for a long time, and it has a similarly narrow beam. However, the TSL-750 is so heavy (nearly 200 g) and bulky that it's uncomfortable to wear on your head.

The wide-angle optics are definitely an improvement, and the flood lens ought to be the one installed when you get the light. Like almost all lights in this price range, the beam is still very circular, so a lot of the light is wasted by shining it into the trees above your head (and potentially blinding oncoming traffic). To Serfas' credit, they do state in the setup instructions to angle the light downwards to prevent blinding passersby, but in practical usage you need to point the light far enough up to shine into the distance, and at that angle, it will probably annoy anyone going the other direction. With the wide-angle optics, I felt much more comfortable riding on trails. Going around corners still left me wanting a wider beam, but it fills out the path nicely. I still don't think the beam is wide enough to be a good fit for street riding – it's still too narrow. The light also completely lacks side visibility: this light would not be a good choice for commuters, as you won't be seen at intersections. The sides of the light's casing actually protrude further forward than the lens, completely blocking any side visibility.

Swapping out the lens

Serfas provides a video demonstration, and step-by-step instructions are also included in the package. You can watch the Serfas video here: After the screws are removed, the front end of the light and the attached rubber seal slide off. The lens and lens holder can then be easily pulled out, exposing the LED and part of the circuitry. I was interested to see what the rest of the electronics look like, so I slid the middle section out of the rear plastic case, exposing the main circuit board of the light.

From there, the new lens can be placed in the holder, the holder placed back on top of/around the LED, and the seal and front re-attached with the screws.

Here's a side-by-side view of how the size and shape of the beams compare:

The light delivers 1:30 of battery life on its highest setting, quite typical for single-piece lights in this price and brightness range. Serfas' TSL line is one of the few lights that comes with an integrated USB-rechargeable battery that can be swapped out by the user. This is an important feature, because battery capacity decreases over time. Rather than buying a whole new light when the battery loses its ability to store charge, you can just buy the battery. It's also nice to be able to carry backup batteries on a ride, to ensure you'll never be stuck out in the dark. While the battery is certainly a standard 18650 on the inside, it's packaged in a proprietary casing that can only be charged inside the light, which makes charging replacements more difficult than it otherwise would be. If the charging circuitry were instead built into the battery and accessed from the backside, backup batteries could be charged externally, which would make them more appealing. The only other lights I've seen with a similar removable lithium battery design are Cygolite's Expilion series, which have the same issue of the battery needing to be inside the light to charge. Serfas also has an innovative option to extend your light's runtime, and I haven't seen anything like it from any other manufacturer. An adapter plugs in where the battery normally sits, and has a power cable coming out the back. This cable can then be attached to their external LiIon battery pack used on higher-end Serfas lights. The BAT-ADT adapter is $20 and the BAT-4 external battery pack is $140. I haven't tested these out myself, but Serfas states the external battery setup provides about 4x the runtime of the internal battery, which would be about 6 hours on the highest brightness level. Added to the initial $160 cost of the light, you're looking at a total of $320 if you were to get the TSL-750 and the external battery. It's an expensive setup, but does provide the versatility to switch between an integrated system for shorter rides and an external pack for longer rides, and comes in cheaper overall than most external-only systems with this price and battery life.

The internal battery is charged via micro USB, which is fairly standard these days. The TSL-750 has a very narrow USB slot, which doesn't work with any of the dozen or so micro USB cables I have laying around from cell phones and other lights. A slim micro USB cable is included in the package, but good luck if you lose that cable or want to charge the light with any other cable you already own. I like being able to top off my light when I get to work, or have the option to charge it with a car adapter, neither of which is practical when 99% of USB cables won't fit. If there's one thing I always like about Serfas lights, it's the mounting system. The standard Serfas mount combines a very sturdy slide-in mechanism that clicks the light into place, and an adjustable quick-release strap that attaches the mount to your handlebars. The mount is a bit bulky, but it provides great flexibility, working on a wide range of handlebar diameters. The light is very stable, staying level when going over bumps. The quick-release mount is very convenient since you can move the light between bikes with ease, or take the light with you to keep it safe when locking up your bike.

The TSL-750 package also comes with a helmet mount. The helmet mount sticks up fairly high, and the light itself is quite bulky, so I don't particularly recommend using it – you might get your head caught in a tree branch if you do. The light's also so heavy that it can be uncomfortable to have on your head for long periods of time.

The entire light has good build quality, with solid construction, and it's very easy to use the light. It has a single power button which cycles between 4 brightness levels. To activate the flashing mode, you press and hold the power button when the light is turned off. This allows you to cycle between brightness levels while riding without getting distracted by a strobing flash pattern. The power button has a built-in power indicator which turns from blue to red when the battery starts to run low. I would prefer a green - yellow - red progression like on Light and Motion's lights, but it is helpful to get some warning when the battery level is dropping. With interchangeable lenses, a removable battery that can be upgraded to a long-lasting external battery, and multiple mounting options included in the box, the TSL-750 is one of the most adaptable lights available. Unfortunately, the narrow beam and lack of side visibility make it a poor choice for commuters, and its weight will likely dissuade road cyclists. For those who primarily ride trails and single-track though, the TSL-750 is a very compelling product. With the wide-angle lens installed, it does a good job at lighting up trails, and the expandable options mean it should continue to perform well for a long time.